Showing posts from January, 2013
Show all

January 24, 2013
Man is never mature Human being is the most evolved creature and can think and has the ability to troubleshoot himself for the mistakes he makes and Improve on his abilities, nature, body language, behavior, and even the way he thinks.He thinks that he is mature after his adolescence and becomes adult and attains maturity. But man is never mature, at every aspect of his life, when we look back go in to memories, even if it is just an 1 hour back incident, we feel it is so immature and we can do it much better.So each and every other second he can be more mature than what he is now.Even a 90 year old, is immature in his behavior and his thinking.But other aspect of it is every man after crossing a certain age, acts like a mature person, like an adult.But the inner child lies in him.It comes out when we meet our childhood friends and the people who are very very close to us.So we act as a mature and grown up in front of others and society because, we fear about society and act so mu
Post a Comment
Read more

DEEPEST HOLE EVER DUG INTO THE EARTH BY MAN 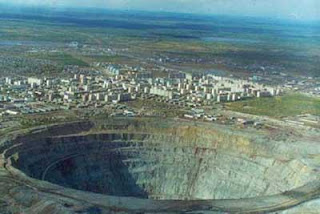 SG-3 in Kola peninsula of Russia is deepest hole ever dug by man into Earth. Its depth was 12,262 metres (40,230 ft) in 1989. It is the result of a scientific drilling project of the Soviet Union in Kola Peninsula The project attempted to drill as deep as possible into the Earth's crust. The Drilling began on 24 May 1970 and aim of drilling is to understand the nature of the earth's crust. The result of this drilling project is known as "Kola Superdeep Borehole".
3 comments
Read more

January 16, 2013
The Pink LakeLake Hillier: The Pink Lake in Australia Lake Hillier is a pink-coloured lake on Middle Island in Western Australia. Middle island is the largest of the islands and islets that make up the Recherche Archipelago, a group of about 105 islands and over 1,200 ‘obstacles to shipping’. The tiny lake only spans about 600 meters wide but its rose pink colour in unmistakable. However, the reason why it’s pink remains a mystery. The shallow briny lake is rimmed with white salt and encircled by dark green forests of eucalyptus and paperbark trees. A narrow strip of white dunes and sand separates the lake from the ocean’s deep waters. The first reported sighting dates back to the journals of Matthew Flinders, a British navigator and hydrographer in 1802. Flinders had climbed Middle Island’s highest peak (now known as Flinders Peak) to survey the surrounding waters when he came across this remarkable pink lake. The reason for the lake’s colour is still under inv
1 comment
Read more

January 10, 2013
Story Line----3.5/5 Screenplay---3.5/5 Direction-----4/5 except the climax Songs---4/5 Cinematography---4.5/5 Hero Performance----3.5/5 Improved a lot in all aspects and Nobody can beat him in Dance Overall I give 3.75 out of 5 for the movie and the movie is Super Hit. Brahmanandam, Jaya prakash comedy scenes are highlight and Item song by Charmi. Intro song is Very good, Remix song is Beautifully done. Direction is bad in the second half, it is routine in every V.V Vinayak movie, where it ends after a big fight and villian is killed.But he stretched the movie little long, But throughout the movie we get entertained by the Timing and the comedy.
Post a Comment
Read more

Delhi Rape Culprits;Castration by chemical means is the correct Justice

January 07, 2013
Delhi rape culprits must not be hanged to death, they have to be treated chemically and castration has to be done so that they experience the pain for the sin all their life. The castration by chemical means and additionally life time imprisonment are the punishments which suits the rapists.This should be in the Law and Perfect justice can be provided and thus rapes can be minimized producing the fear in the minds of the freaks and psychos. Apart from these strict measures by the government and the law, Police department should be made independent from  politics and laws for the policemen, if at all they are involved should be made even more strict. The change comes from the Individual and the Family, Proper care should be taken by the family members and the teachers in the school from elementary stage to adolescence, teen age and till adult, making them know the moral values, ethics and Humanitarian values. But the root cause being the ILLITERACY in India, All big organisations an
1 comment
Read more
More posts